The goal of the SafeTRAM project is to develop an innovative system that would increase traffic safety by implementing safety functions for urban rail traffic, thus lowering the number of accidents causing great material damage and human casualties.

Electric trams use up to five times less energy than an automobile, do not pollute the environment and have a number of ecological advantages with respect to road traffic, which is responsible for 95% of traffic gas emissions.

In the near future, systems like SafeTRAM will be a key element of autonomous vehicles which is one of the final goals of modern society.

General goal: Increase the innovation and export potential of the Croatian economy in the area of rail transport.

Our CEO Siniša Marijan spoke about our two current projects – SafeLog and SafeTram, and accredited laboratory testing services for the Z1 Television. Also, you will find out more about our thriving cooperation with FER. 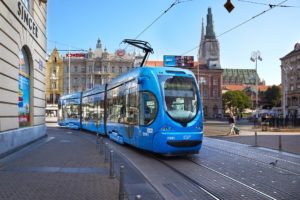 The prototype SafeTram system was tested on the KONČAR TMK2200 electric tram. The test drive aimed to test and verify the selected combinations of sensors and collision detection algorithms in real-world conditions. The SafeTram system detects vehicles and pedestrians near the tram and alerts the driver to a potentially hazardous traffic situation by light and sound signals.

With a 10x shorter response time than the average human, SafeTram system will assist the driver in avoiding collisions, and contribute to the reduction of tram accidents and increasing the safety of tram traffic. Testing in real-world conditions and different everyday traffic scenarios will help improve system performance.

The first dissemination workshop of the project SafeTRAM was held on November 17th, 2010 at 11:00 am in the large hall at Končar – Elektroindustrija d.d., Fallerovo šetalište 22. There were presented research results, reached during the fundamental phase of the project and completed on 30.9.2017. The aim of this workshop was to get acquainted with the activities currently carried out and with the future project activities.

The first dissemination workshop of the SafeTRAM project will be held on November 17th, 2010 at 11:00 am in the large hall at Končar – Elektroindustrija d.d., Fallerovo šetalište 22.

The total value of the project is HRK 18,431,121.52, while the awarded grant amounts to HRK 13,285,558.30. The contract is based on the Call titled „Boosting Development of New Products and Services Arising from Research and Development Activities“. In executing this project, KONČAR will co-operate with the Faculty of Electrical Engineering and Computing of the University of Zagreb (the grant for the partner amounts 4.884.202Kn).

The presentation of the winning projects was attended, among others, by the Vice-President of the Croatian Government and the Minister of Economy, Entrepreneurship, and Crafts, Martina Dalić, who signed a total of six contracts with the beneficiaries of the following Calls for proposals – “Boosting Development of New Products and Services Arising from Research and Development Activities” and “Innovations in the Newly Established SMEs”, and presented 14 grants to the winners of the “SME Competency and Development” Call.

In addition to the Vice-President Dalić, the ceremony was attended by Gabrijela Žalac, Minister of Regional Development and EU Funds, with her associates, Darinko Bago, Chairman of the Management Board of KONČAR, with his associates, and representatives from companies which received EU funds.

koncar-institut.com uses temporary and permanent cookies with the sole purpose of enabling you a better user experience on our site. Learn more